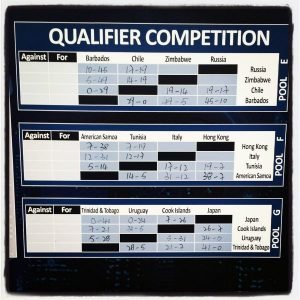 The Bajan team were a mixture of local boys and British boys whose parents or grandparents were Bajan.  The trip to Hong Kong was made possible by sponsor: Timothy Oulton.  The Trini team appeared to be all Trinis.

Both West Indian teams were great ambassadors for their countries and for their sport, signing kids T shirts at the players tunnel exit each time they played.

Here is an extract from the SCMP (the local English language newspaper the South China Morning Post) live blog from the HK Sevens 2014 day one and day two. 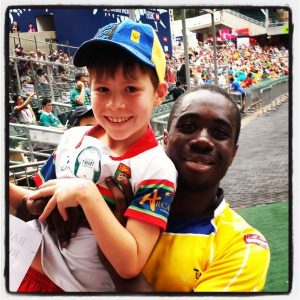 Russia 45 Barbados 10
Barbados go in front, but Russia hit back with four first half tries to stomp out ideas of an upset. Putin’s men being roundly booed by the HK Stadium fans. That’ll teach him. I do see a Russia flag being waved in the South Stand, mind you.

Not super impressive from Russia, despite the scoreline, against probably the worst team in the entire tournament.

Zimbabwe 49 Barbados 5
A pounding that for the débutantes, though Leon Driscoll at least got a try for them. Zimbabwe a decent side and Stephan Hunduza got a hat trick. 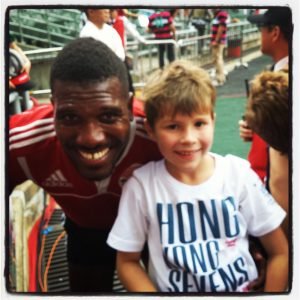 Japan 41 Trinidad & Tobago 0
Favourites continue where they left off, Lote Tuqiri scoring twice in the first half and Yusaku Kuwazuru adding another after the hooter.

Straight from the restart, Josefa Llidamu goes on a tremendous run from 60 metres or more, best try of the tournament so far. Timoki Kitagawa gets the fifth try of the game shortly afterwards with some jinking feet. Lilidamu adds another, barging and burrowing his way through three or four West Indians. Yoshikatzu Fujita ticks the score over the 40-point mark

Trinidad and Tobago outclassed, and Japan definitely look big favourites to win that one coveted place on next season’s IRB Sevens World Series. They should thump the Cook Islands tomorrow to comfortably win the pool.

Cook Islands 21 Trinidad & Tobago 7
Not exactly a thriller that one, no offence to any Caribbean / Pacific islanders out there. T&T put up a decent fight for a while before being outclassed by their (slightly) more experienced opponents. Japan will absolutely walk this group.

The winners of the 2014 Hong Kong Sevens were the Kiwis.  Here Kiwi captain DJ Forbes leads the Haka in torrential rain at the end of the 2014 HK Sevens.

Advance to the 8 minute 20 second position to see the NZ team performing the Haka in the rain.

And here is Kiwi captain DJ Forbes again performing an impromptu Haka in the rain at what’s known as Kiwi corner of the stadium.

Advance to the 25s second position to see the NZ team performing an impromptu Haka in the rain at what’s known as Kiwi corner of the stadium.


And the best HSBC Hong Kong Sevens ad was from 2013


Below are a selection of photos from the 2014 Hong Kong Sevens.  You can click on the thumbnail images below to see a larger image with captions.