The idea of creating a water passage between the Pacific Ocean and the Caribbean Sea was first considered as far back as the early 1500’s.  Charles 1st of Spain wanted a faster and safer route from the west coast of South America to Spain and he commissioned a survey of a possible route.  They did not proceed further as the technology for such a great undertaking was not available at the time.

The French were the next to try.  In 1877 they proposed a number of different plans. One was a sea level canal with a 7.7Km tunnel to get through the continental divide at Culebra.  This attempt failed due to Malaria, Yellow Fever and lack of funds.

Another French plan was to create an artificial lake and install locks at each end.  This plan closely followed both the Spanish plan and the existing canal.  They never progressed with this plan.

The next attempt was by the Americans.  Panama got independence from Colombia on 3rd November 1903 and in May 1904 work was started on building the canal. Many workers from the Caribbean made good wages working on the canal and the largest number from a single country were from Barbados. The Panama money provided a welcome relief for the under privileged in the Caribbean.

I took the opportunity to visit Panama City on my return from Cuba. First stop was the visitors centre at the Mirflores Locks (Pacific Ocean side) and the following day did a partial transit of the canal.  Below are a series of pictures that will give some idea of the magnitude of the operations. 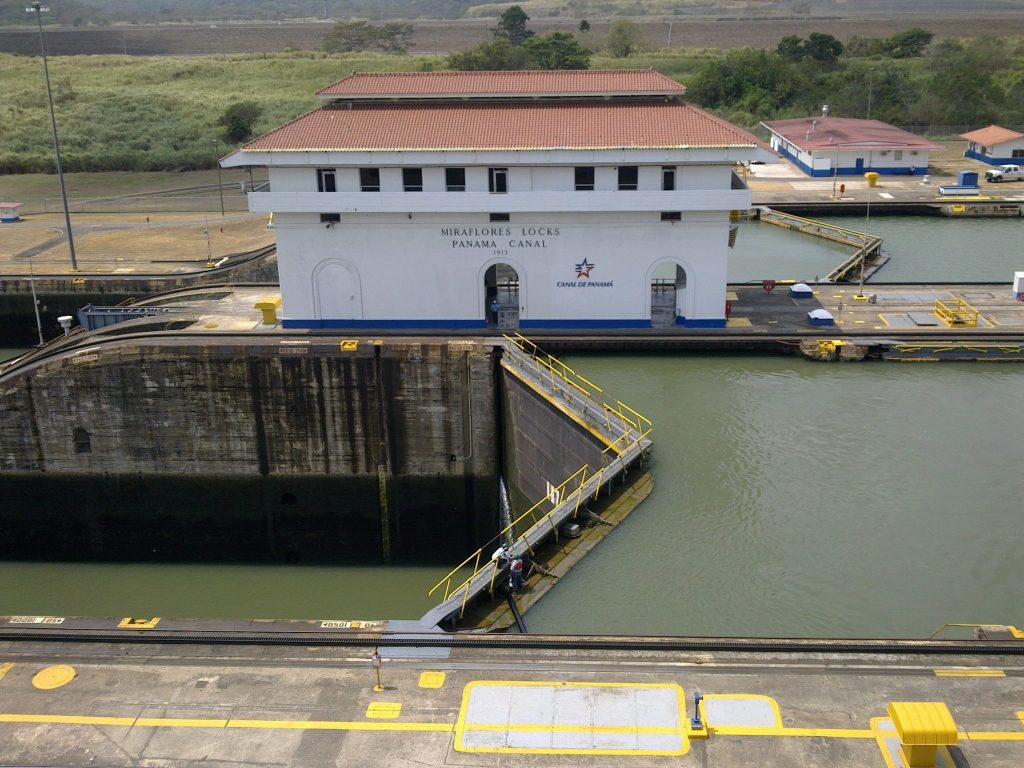 The two lanes on the Pacific end of the Miraflores locks.

The water in the left is at the level of the Pacific Ocean.  The first  two locks raise the ship  to  the Miraflores Lake.  These were completed in 1914 and are 33.5 meters wide and 304.8 Meters Long. The gates were made in the USA and are riveted together. They are properly maintained and are still in good order.

There are 2 lanes of locks. This allows for one set to be closed for maintenance without disrupting traffic through the canal. In 2016 a new and larger series of locks were finished. These are 55 Meters wide and 427 Meters long.

Below are a series of pictures of a ship transiting the first Miraflores Lock from the Pacific. 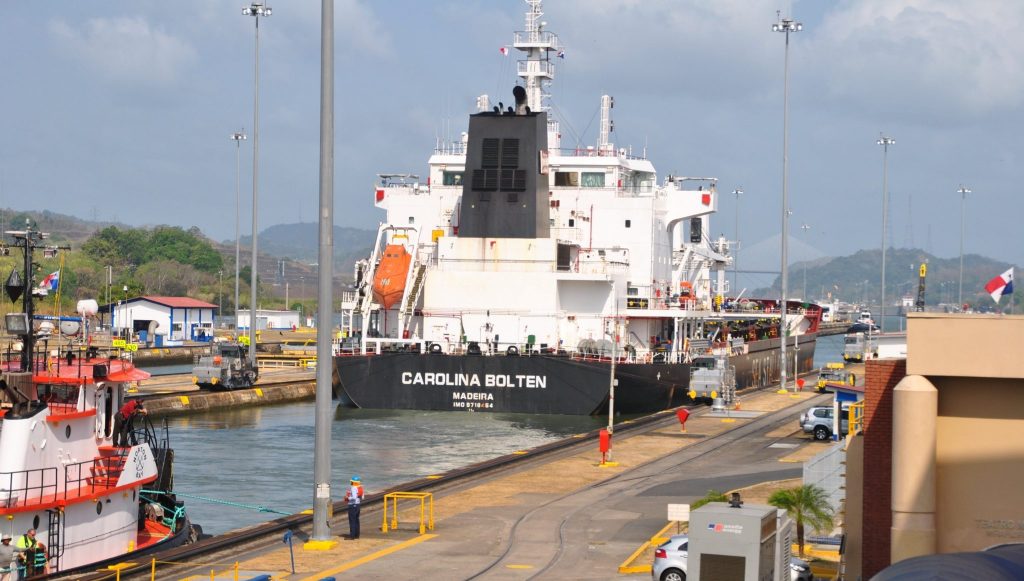 After the ship has entered the gates to the Pacific are closed and water flows from the upper  to the lower lock. Once the water levels have been equalized the gates separating the locks are opened and the ship moves forward.  They are then closed and the upper lock filled with water from the Miraflores Lake.  The ship is then free to proceed to the Pedro Miguel Locks which will raise it to the Culebra Cut.

Two gates are used here so that if one fails the entire water in the Miraflores Lake will not drain into the Pacific Ocean.

The visitor center at Miraflores also has an IMAX theater where a short film of the history of Panama is shown.  There is also a good museum, and gift shop. The following day I made a partial transit of the Canal from the Pacific to the end of the Culebra Cut. The cruise was extended by two hours due to various reasons.  This gave us additional time to observe the workings of the locks and associated equipment. 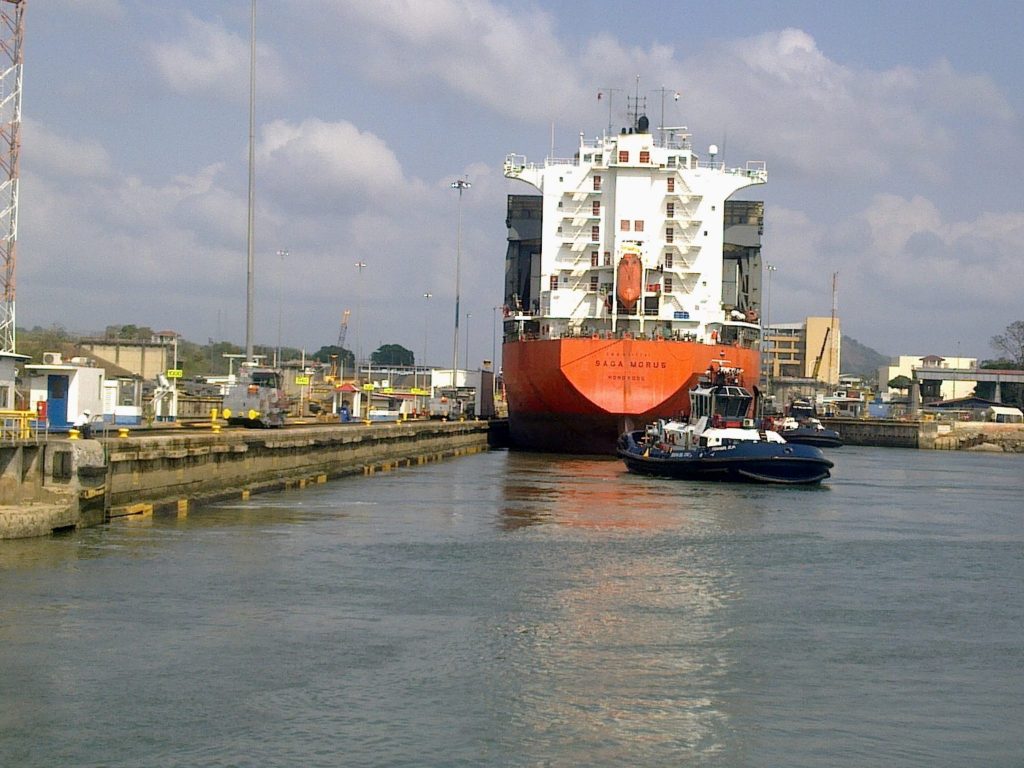 Entering the first lock at Miraflores from the Pacific Side

After sailing towards the first Lock  we were due to enter along with this container ship.  However at the last minute a tug had to go through and took priority. We remained outside and had a good view of the ship entering, the gates closing and being raised before moved on.

The next vessel was a small cruise ship, The Marco Polo, and we shared the transit with them along with another vessel. When we were into the lock a passenger on the Marco Polo got ill and had to be taken off by the emergency services. The delay gave us ample opportunity to watch ships transiting the adjacent lock. 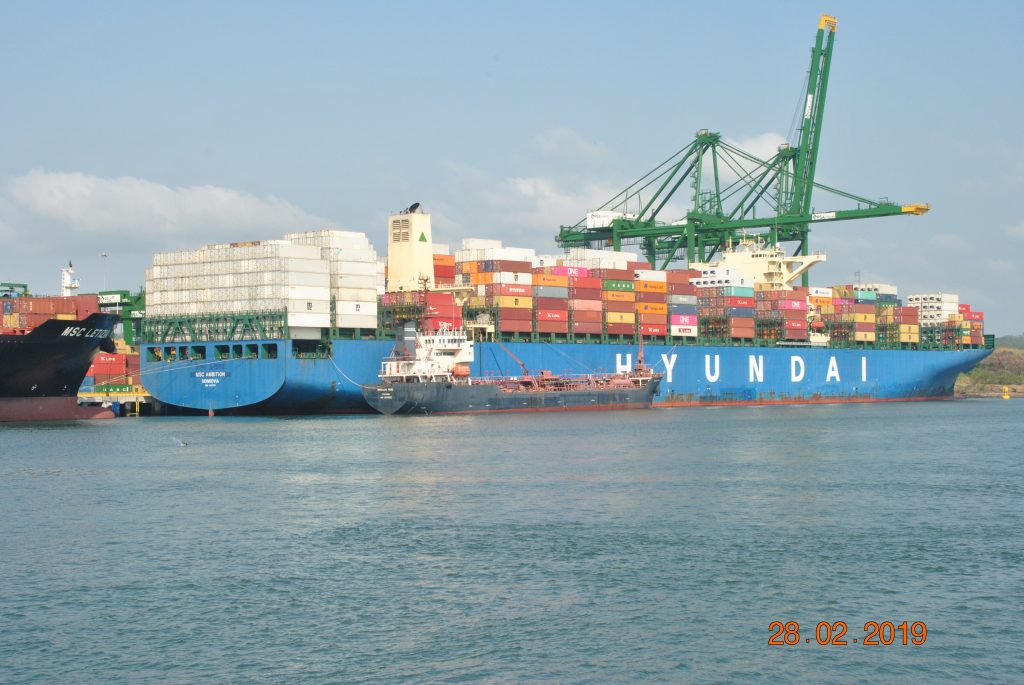 Not all of the cargo transits the canal. Some containers are off loaded and transported across by train where smaller ships take them to their destination. In addition to ocean freight Panama has a large Air transshipment hub. 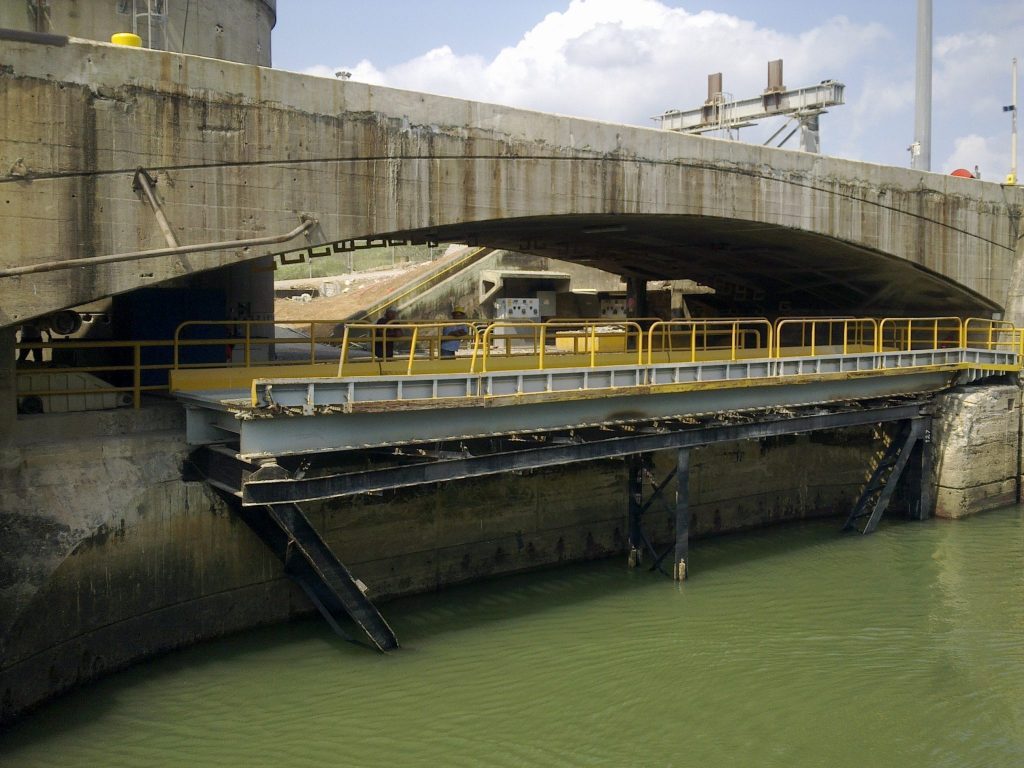 After the first lock had been filled and the gates opened we followed the Marco Polo into the second lock. 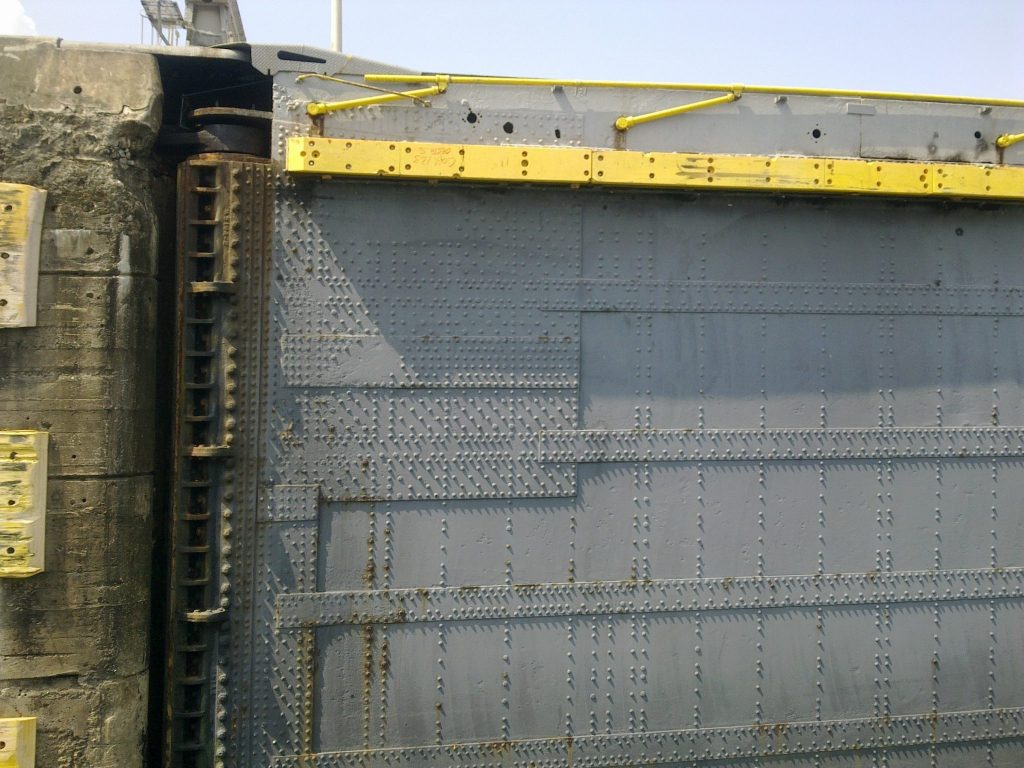 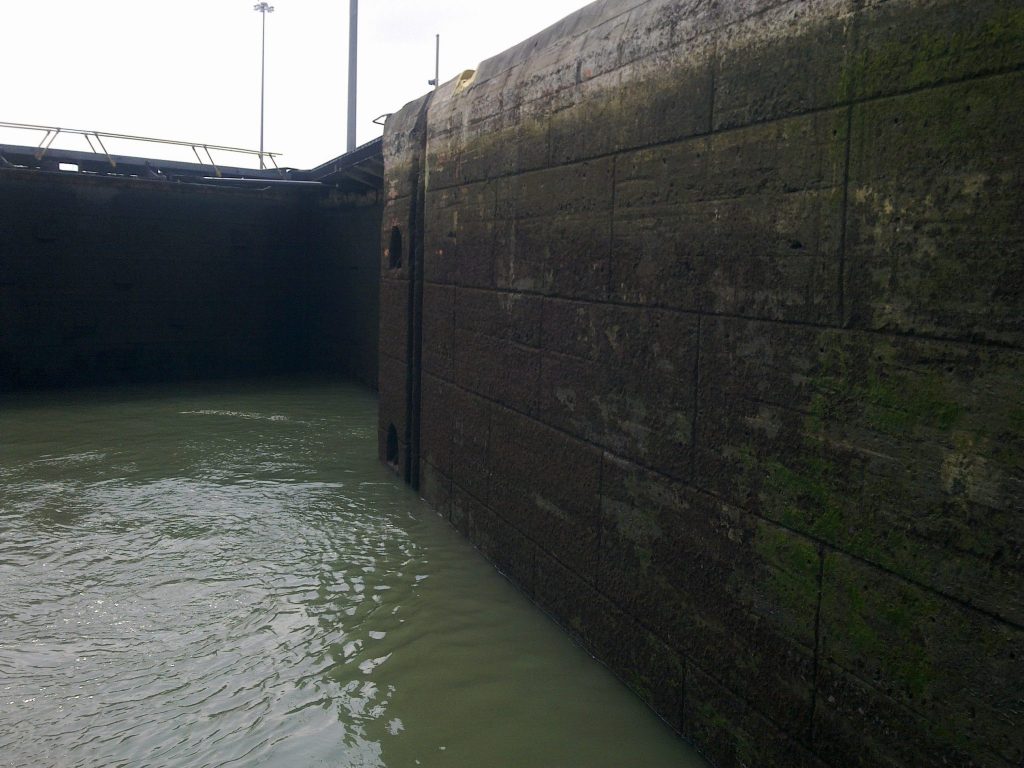 From our small ferry the size of the locks is very apparent. The gates are almost closed behind us and the lock will soon fill from the man-made Gatum Lake. 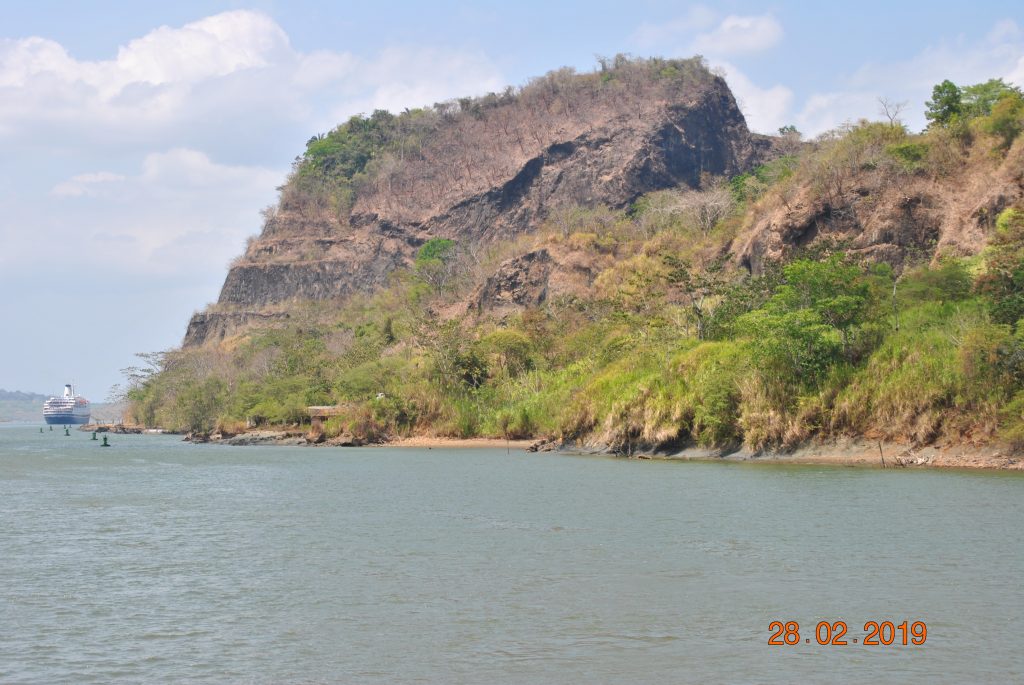 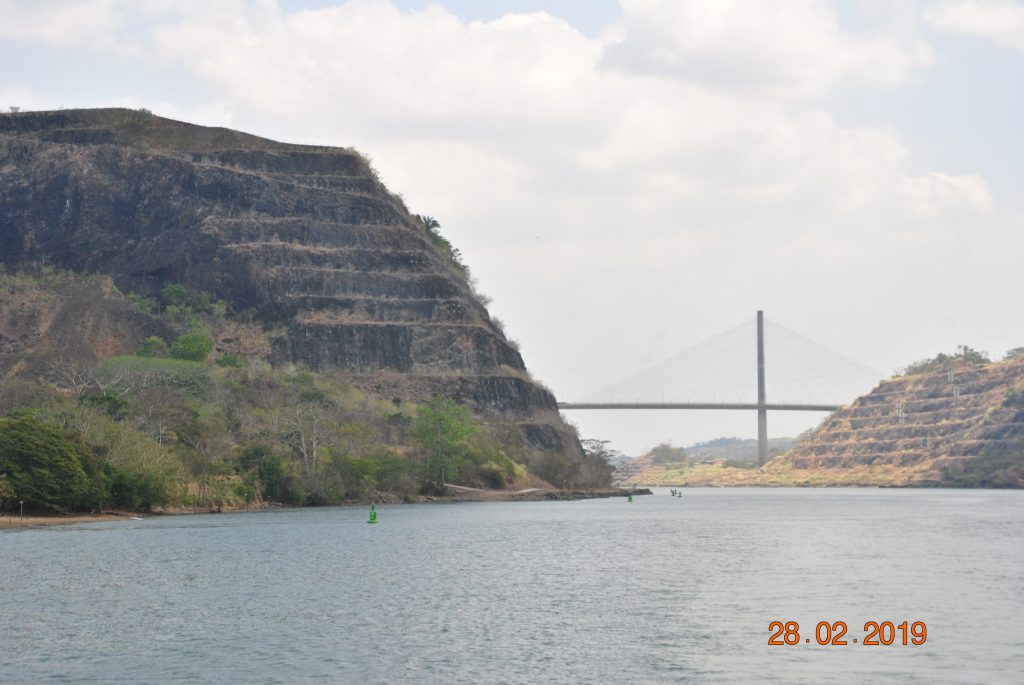 The Culebra Cut is a narrow 12.7Km  long channel that was dug through the Central Mountain Range.  These pictures give some idea of the amount of work required.  The   Centennial Bridge is 80 Meters above the canal allowing large ships to pass under. At the end of the Culebra Cut we were transferred by bus  to the hotel.

In Panama I was met at the airport  by Aldo Ernesto Atherley and taken to the hotel, visitor centre and a tour of Panama City.  His great grandparents came from Barbados to build the canal and never left.  He operates TAXI / Guide service  and is reliable and very knowledgeable. He is fluent in Spanish and English.

For further information on the Panama Canal check here.

How the Panama canal works (in Spanish)