The morning of the 18th May 1942 dawned like all previous mornings since the SS Quaker City, a Hog Island class merchant ship, left Bombay and sailed via South Africa on the way to Norfolk, Virginia. She was loaded with 4,500 tons of Manganese Ore. This is a very important ingredient in the production of steel and was in heavy demand due to the war.

This report was in the Barbados Advocate on 25th May 1942:

15 More Survivors in Port. Lady Bushe in Relief Party.
Fifteen Survivors who had been part of the crew of a missing vessel reached this island on Sunday after a few days in two open boats. Others expected in another boat have not arrived.

Of the total crew of forty, thirty got safely away in the boats after ten of them had been killed in the explosion that opened the stem where they had been sleeping. They brought with them one of the six cats which had been on the ship.

At Central Station
Captain E. Richmond and his men except for sunburn and stiff joints were in fairly good shape.  One party arrived in St. John and the other in St Peter. They were all brought to Central Police Station. Here Police officials and Harbour Authorities were present. The men were examined by Dr H.E. Skeete who had in attendance No 2 Unit of the St. Johns Ambulance Association.  Lady Bushe was among the uniformed assistants whose work lasted until afternoon.

Among this group was John Heller of Milwaukee, Wisconsin who had recently served with the American Volunteer Group in Burma.

The Story
The story told was almost identical with that released a few days ago by another group. Their craft was hit and sank within minutes. The German submarine was described as a monster with two anti-aircraft turrets and a plane catapult came to the surface.

“It is somebody’s duty to go out there and get that fellow with his courtesy and his brand new death machine.” Said one of them. “Oh! Don’t fear he will soon get all he wants” said another.

John E. Heller was a passenger on the SS Quaker City travelling from India to re-enlist in the USA Armed forces. He had been in the US Army and was mustered out when he volunteered to serve in China and Burma with the American Volunteer Group (The Flying Tigers) under Gen. Chennault. He served in Burma and China and after war on Japan was declared by USA he was returning home to re-enlist.

He boarded the Quaker City in Bombay, (today called Mumbai), India. As they approached the Caribbean Captain E. Richmond warned of the U-boat activity in the area. He asked John to take turn as a lookout, even though he was a passenger, which he did.

Soon after John came off watch there was a loud explosion to the stern of the vessel. No one had to ask what had happened. The 10 men sleeping in the stern never heard or felt the attack.

John knew that the ship was sinking and quickly collected his important papers before getting into a lifeboat. The surviving 30 crew and passengers, and one cat, had 10 minutes to get into the 4 lifeboats before the Quaker City sank. He was on the lifeboat with the Captain.

The German U-boat U-156, captained then by Kapitänleutnant Werner Hartenstein, had been shadowing them for some time waiting for the correct moment to attack. The U-boat surfaced and came close to the life boats. He gave them their position and a course to reach Barbados before leaving the area.

One life boat with seven survivors was picked up on the 24th May by USS Blakeley and carried to Trinidad.  Another lifeboat with eight survivors reached Dominica on the 26th May. The remainder 15 in two Life Boats reached Barbados on the 24th May.

After reaching Barbados and recovering from the incident, John Heller travelled to Trinidad to re-enlist at the USA base there. He served the remainder of war in Trinidad in the Army Air Corps. He left the armed forces as a Master Sargent.

John Heller was more fortunate than most of his shipmates. While recovering from dehydration and sunburn he was treated by the Ladies of the No: 2 Unit of the St. John Ambulance Brigade. His favourite nurse was Elsie Dorothy Whitley Griffiths.  The same year she followed him to Trinidad and they married on 5thNovember 1942 in Port of Spain. They spent their honeymoon in Tobago.  After the war they moved to the USA.

Korvettenkapitän Werner Hartenstein had a successful period in the Caribbean.  He showed humanity to his enemy and tried not to cause unnecessary loss of life. He attacked and sank The Laconia.  His actions here, and the results, to save as many as possible led to new rules of engagement for war at sea.

During her fifth patrol in 1943, before she made any attacks, U-156 was attacked twice. As a result of the second attack, on 8 March 1943, she was sunk east of Barbados in position of 12.36N 54.39W, close to where she sank the Quaker City the previous year, by a US PBY Catalina  captained by Lieutenant E. Dryden operating out of Trinidad.

The aircraft dropped four Mark 44 depth charges at 13:15 from an altitude of between 20 to 30 Meters which straddled the submarine. Two were observed to hit the water close to starboard and just aft of U-156, lifting it and breaking it in two, followed by an explosion.

At least eleven survivors were seen swimming in the water. Two rubber rafts and rations were dropped, and five men were seen to reach one of the rafts. The USS Barney was dispatched from Trinidad to rescue the survivors. None were found and the search was abandoned on 12th March 1943.

At that time John Heller was stationed in Trinidad with the Army Air Corps. He was responsible for making sure that the aircraft had the fuel and armaments for their submarine hunting duties.   So he had a hand in the sinking of the Submarine that sank him.    It would be interesting to know if he handled the depth charges that ultimately sank the U-156.

Captain E. Richmond of the Quaker City gave the ships compass to the Barbados government. This was installed on the Investigator that operated in the 50’s and 60’s for Department of Fisheries.

In 1949 the first motor propelled fishing vessel in the form of the “Investigator”, owned by the Fisheries Division, was introduced to the Barbadian fishing fleet. The dimensions of the vessel were 43′ 6″ overall length, 13′ 2″ beam and 6′ 8″ draft. It was powered by a 53 H.P. Caterpillar® diesel marine engine. The vessel was officially launched on 21st October 1949 and its inaugural trip took place on 12th December 1949.

If anyone can give the names of the boat builders in this picture please contact me or add their name as a comment.

John Heller never forgot Barbados. He made sure his children knew the island and how well he was treated on his arrival. The family moved to Barbados for a few years in the 1950’s and one of his 4 children, John Heller, was  born here in 1952.  After returning to the USA the family returned a few times on Holiday. He worked with Kollmorgen  which produced periscopes for submarines and he was involved in the inquiry into the sinking of the USS Thresher.

His last visit to the island was a few months before he died.  He was interviewed by Alfred Pragnell (AP) at Martin’s Bay for his “Sunday Magazine” radio program on Redifussion Barbados.  This was broadcast nearly 57 years to the day that John landed in Barbados on 24th May 1942.

You can listen to AP’s interview with John Heller at Martin’s Bay here. It’s very moving.

[br] While in Barbados John Heller also gave an interview to the Nation Newspaper which was published on 23rd July 1999. He died a few days later on the 29th July in the USA.  .

You can read the full Nation article here. 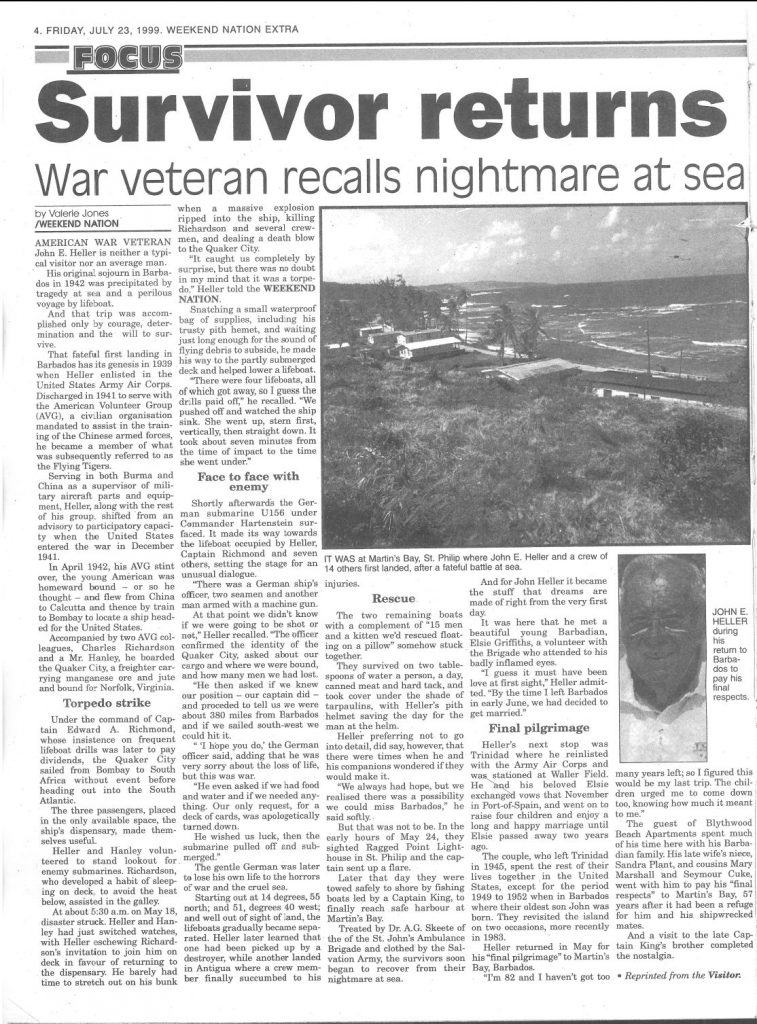 Here are some pictures that the Heller family have kindly shared with us:

Click here to read John Heller’s Obituary that appeared in the Weekend Nation on Friday 9 August 1999.

I wish to thank the following without whose help this article would still be in my pending file.

Ellen Lutzow  for contacting me many months ago asking for help in researching her father’s story. She is the daughter of John and Elsie Heller. That request was sitting in my “to do box” for a very long time.

The staff of the Barbados Library Records department who are always helpful in assisting me in researching this and other stories.

Lana Yearwood of the Library of the Nation Publishing Ltd for finding the article on John’s story.

Gregory T. Franklin of the Barbados Fisheries Department for taking the time to find the picture and information on the Investigator.

For further information on the events and people mentioned in the article check: