The Kent was an East Indiaman sailing for the East India Company.   She was 40.5 Meters long, and had a beam of 13.2 Meters. She made two successful trips from England to India with Henry Cobb as Captain. On the 19th February 1825 she left the Downs with 20 officers, 344 Soldiers, 43 women, and 66 children. In addition she had some private passengers and a crew of 148 men. There was also one stowaway, the wife of one of the soldiers who did not want to be separated from her husband. They were bound for Bengal and China.

The Cambria, under the command of Captain Cook, was a brig of 200 tons and after being delayed for over a month was bound for Vera Cruz with 20 or 30 Cornish Miners, Yorkshire smelters and other agents of the Angle – Mexican Company. She had 11 crew.

The Caroline was on a passage from Egypt to Liverpool under the Command of Captain Bibby.

Father Neptune decided that a combination of seemingly random events would enable these three ships to meet and play  vital roles in one of the most amazing rescues of a ship in distress.

The Kent had good weather for the first few days. Then they met a storm in the Bay of Biscay. On the 01 March the larger sails were either taken in or closely reefed. The captain and crew were prepared to weather out the storm. She carried a large quantity of cargo including spirits and explosives.

On a routine visit to the cargo hold to make sure that all was secure and not liable to shift one of the officers dropped the oil lamp. This ignited the fumes from the spirits and the fire rapidly spread. In an effort to contain the fire the crew tried to smother the area with wet sails, pieces of cloth and hammocks. This failed. The captain then ordered the hold to be flooded by opening the deadlights. This was a desperate, but necessary, effort to stop the fire from getting to the gunpowder. This slowed the advance of the flames but did not extinguish them.

They were now facing a certain death either by drowning or by fire. Most of the crew and passengers kept calm, prayed and prepared to meet their maker. Lieutenant Colonel D. McGregor wrote a letter to his father, placed it in a bottle, and sealed it. Some broke into the stores and drank the liquor. Some sat on the top of the gun powder preferring to be killed instantly than of a slow death by drowning or by fire. All of this was taking place in the storm.

When all hope was lost a sail was sighted off the leeward bow. The Cambria saw the smoke and was returning to help. Due to the very rough sea and explosive nature of the cargo the captain of the Cambria could not get too close but stood a little way off and prepared to receive the passengers. The lifeboats were lowered and first the women and children were transferred to the Cambria. Several trips were made, but many men lost their life in the trip over, either being crushed between the boats or by drowning.

One of the soldiers’ wives delivered a baby about an hour or two after her arrival on board the brig. Both survived, and the child was named Cambria.

By evening most had been transferred to the Cambria. She prepared to return to Falmouth with the survivors. The Cambria was now overloaded with over 600 people and was in danger of sinking. Luckily the wind remained in the South West and she was in Plymouth in 2 days.

At 2am the gunpowder finally exploded and that was the end of the Kent. Eighty one lost their lives.

The Caroline was some distance away, saw the glow in the sky from the explosion and changed course to help. When she arrived 14 men were found clinging to the floating masts. These were picked up and carried to England to be reunited with their comrades.

This bottle, left in the cabin, was cast into the sea by the explosion that destroyed the Kent. About nineteen months afterwards the following notice appeared in a Barbadoes (West Indian) newspaper:—

“A bottle was picked up on Saturday, the 30th September [1826], at Bathsheba (a bathing-place on the west of Barbadoes), by a gentleman who was bathing there, who, on breaking it, found the melancholy account of the fate of the ship Kent, contained in a folded paper written with pencil, but scarcely legible.” The words of the letter were then given, and a facsimile of it will be found on the next page. The letter itself, taken from the bottle thickly encrusted with shells and seaweed, was returned to the writer when he arrived, shortly after its discovery, at Barbadoes, as Lieut.-Colonel of the 93rd Highlanders, and the interesting relic is still preserved by his son (at that time called “little Rob Roy”), who is not mentioned in the letter, but was saved…

NOTE: This is taken from a survivors account. Bathsheba is on the East Coast, Atlantic Ocean side of Barbados.  The payload fairing for the Soyuz Rocket – flight VS13 also washed up in this area in 2016.

Lieutenant Colonel D.McGregor of the 93rd Highlanders letter in a bottle reads: 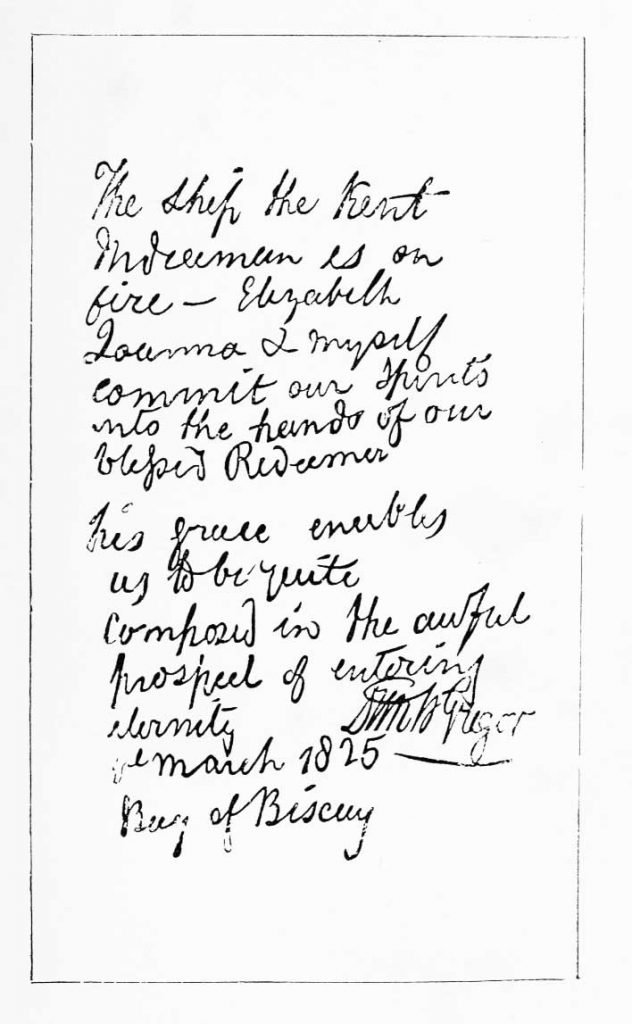 The Ship Kent Indiaman is on Fire, Elizabeth, Joanna, and myself, commit our spirits into the hands of our blessed redeemer; his grace enables us to be quite composed in the awful prospect of entering eternity.
D.McGregor, 1st March 1825, Bay of Biscay


Lieutenant Colonel Duncan McGregor did not get to India but followed his bottle to Barbados with the 93 Highlanders who were stationed at St.Ann’s Fort.  He was an officer of strong religious feelings, and took a deep interest in the welfare of the soldiers.  More information is available here.

I got this story originally from “The Tragic History of the Sea – Shipwrecks from the Bible to the Titanic” by Anthony Brandt.

A detailed account by a survivor of the Kent can be read here.

A poem: The Burning of the Ship Kent can be found here.