The High Altitude Research Project (HARP) space gun was set up at Paragon just to the east of the runway of what was then Seawell Airport – the brainchild of Canadian ballistics scientist Dr. Gerald Bull and jointly funded by McGill University, Canada and the USA Army Research and Development Center.

The HARP project was established to develop a large gun to shoot things into space. It was originally built from a 65-foot long, 16” caliber naval cannon, the kind that might be seen on a battleship. The cannon was later joined to another barrel, extending the length of this super-gun to 120 feet and making it too big for effective military application, but perfect for satellite delivery. It was a serious attempt to use low-cost cannons in place of expensive rockets to launch satellites into space.

The HARP space gun arrived in Barbados by a USA Navy landing craft and came ashore at Foul Bay Beach in 1962. The gun was mounted on a train carriage. Lengths of tracks were laid across the beach and up the hill. This was pulled by a Caterpillar tractor. When it got to the end of the tracks the rails behind were removed and placed to the front and the process continued. The pull up the hill from the beach would have been a heavy haul. As far as I remember, as it went up the hill the tracks behind the carriage were covered with sand to stop the whole thing from running into the sea if the tow-cables broke.

It was pulled along the coast, past what is now Ocean City, Green Point and Penny Hole to its final resting-place below the runway. It must have been a tedious process. After travelling a few hundred meters the track was moved and laid out in the front.

An American sailor was killed in the unloading operation when he fell into the sea and was crushed between the landing craft and another boat. I remember my parents carrying me to Foul Bay when it was being off loaded. Although I only saw the picture of the unloading recently it is exactly as I remember it.

Other smaller guns were installed at a later date.   A little known fact is that one was installed at Ragged Point, just to the east of the Lighthouse and fired its shells north. I recently met a man from St. Lucy who told me that as a boy he used to go to the cliff and watch the shells fall into the sea.

The stated reason we were given at the time was it was to test the feasibility of putting a satellite in space. In my opinion that was never the reason for this gun. The gun points at 128 Degree (magnetic). The easiest way to get an object into space is to launch it due east. There is a lot of room in the area to position the gun pointing to the east if they wanted to.

All pictures on the gun firing show it firing at an angle and not straight up. This is not the way to get into space. Of course the reason for this may be that they did not want to shell to land back on the island.

When the gun was fired it shook the land for miles around and the BOOM could be heard over most of the island. On the days that firing were taking place announcements were broadcast over Rediffusion (a local wired radio station) that we were to keep well away from the area. Naturally that meant that I had to go and have a look. One day I went to Penny Hole with some friends. We were walking across the pasture trying to find out where the gun was when it went off. I remember a very loud noise, and seeing a huge mushroom cloud not that far away. We left in a hurry.

Once a part of the shell casing landed in the Four Roads area. The HARP staff quickly collected it. It did not kill a donkey as some reports have it.

The missiles were named Martlets, after the mythical bird on the crest of McGill University, Canada who administered HARP.

The project trained a lot of local men in radar, electronics and general mechanical engineering. Over the years I have met several whom got work and training, and made good wages at HARP.

In 1988 [21 years after the HARP Project was abandoned in Barbados] the USA decided that it wanted one of the spare barrels back. A local company, Coles Engineering, was contracted to move it on a specially designed multi wheeled hydraulically steered trolley. One end of the barrel was placed on this carriage and the other end on a low loader trailer pulled by a truck. It  was loaded on to the Barge ITCO 1401 in the Careenage. One end of the barge had to be flooded to get it to the same height as the Careenage. As the truck moved on to the barge the water was pumped back out to allow the multi-wheeled dolly to get on.

It left Barbados on 23 June 1988. It was towed by the tug La Carriere, with Ian “Blue” Cox as Captain, to Beaumont, Texas, arriving on the 08 July and was delivered to Sandia Laboratories. It was sent to a desert location where the low humidity would preserve it.

On the return trip the Tug La Carriere ran into the tail end of Hurricane Gilbert and had a very rough trip.

Whatever the true reason behind the project it is a shame that what remains of the HARP guns is being allowed to rust away neglected and forgotten. HARP was a small but important part of our history. Maybe the Barbados National Trust will recognize this and organize a restoration program.  In the meantime the HARP space guns are rusting away – all for the want of a bit of paint every few years and some energy to get out and market this piece of history. 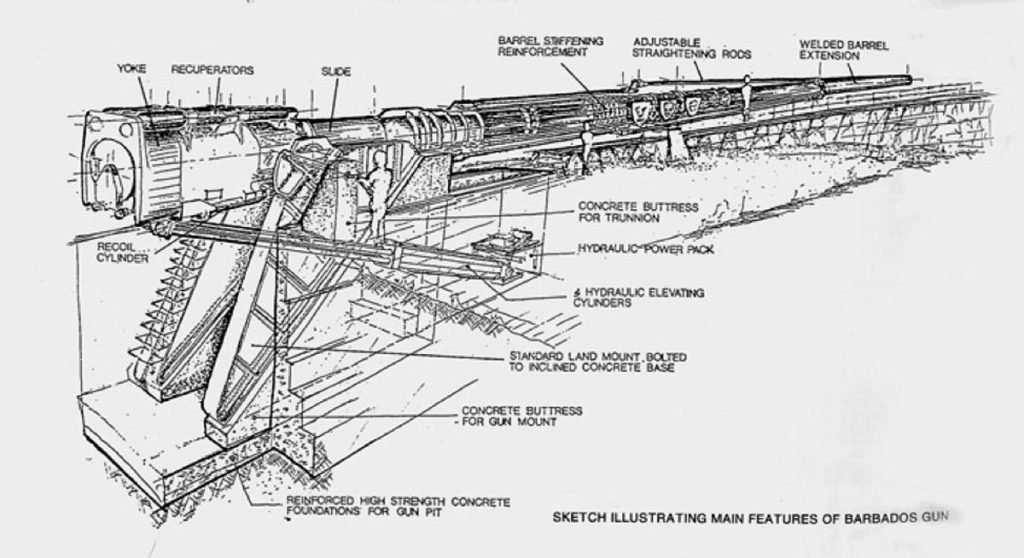 This drawing illustrates the major components of the 17-in. HARP gun in Barbados.
The HARP space gun sits on a massive concrete base inclined at 45 degrees, is mounted a navy BB turret GIRDER which allow a CRADLE elevation of almost 90 degrees. The 86‑caliber (118‑foot)-long barrel consists of two modified MK II tubes joined in a massive sleeve by bolted, mating flanges. Four tension bars running from both the breech and from the muzzle to a cruciform spreader midway on the sleeve maintain barrel alignment and prevent droop. Elevation is accomplished by 4 steel rods running from the lower rear portion of the cradle to a hydraulic cylinders located in the pit.
When in the horizontal position, for loading or when not in use, the barrel sleeve rests on a concrete support. Behind the breech is the loading “rail” about 30 feet long with a hydraulic cylinder of half that length to ram projectiles and powder. Extending about 100 feet in front of the muzzle, there is a horizontal rail on vertical supports which appears to have been used to mount a barrel cleaning device.
The breech is marked: U S Naval Gun Factory W.NY, 16 In. No. 131, Mk D Mod O, Insp EPA, Wt 283268#. The barrel started life as a Mk II Mod 1 and was modified internally to be the ballistic prototype for the Mk 7 Mod O guns for the IOWA class ships. Tests established the ammunition characteristics before rifling the first Mk 7 Mod O barrel.
For HARP, both barrels were smooth bored to 16.4″, (16.5″ or 16.7″ as described in different articles. (Some of the illustrated parts are “incorrectly” named possibly due to the difference between army and navy names for the same part.)
Illustration: Unknown source.

You can click on the thumbnail image to see a larger image with captions.

A selection of photos from the Facebook group: Old Time Photos Barbados.

Below is an aerial photo of the HARP guns in 1970.  It was sent to us by Jim Webster.

HARP continues to slowly rust away. Here are some images of HARP from a walk to the HARP site at Paragon on 19th February 2022.

Listed below is some background on the HARP Project:

This site uses Akismet to reduce spam. Learn how your comment data is processed.

If you would like to be kept informed when there are updates to BajanThings please click here to subscribe to the BajanThings e-mail update notification. Whenever there is new content added to BajanThings you will receive an e-mail telling you of the update.
A BajanThings Recommendation

Do You Want The Truth Or Something Beautiful? The Empire Windrush story has been updated.

Torpedoing of the Cornwallis in Carlisle Bay, Barbados, 11th September 1942 has been updated.

Memorials for departed friends has been updated, a fourth cairn has been added.

Popular Posts (over the last 48 hours)