Cuba is a country that is misrepresented and misunderstood by the rest of the world. I have a very different view from that portrayed in the press and internet. Cubans are very proud of their heritage and history. Their education and health care systems are much better than most countries.

There are many Colectivos (shared taxis), Buses, Accommodation of all levels and Restaurants which are owner operated and offer good value.

Although not crime free, it is one of the safest places I have visited. Much safer that other South and Central American countries. I was safer walking alone in the hills or in the back streets of Havana, than in London or Miami.

I am not saying that it is all perfect. A quick visit to any shop you will notice the lack of choice of imported goods. A heavy emphasis is placed on locally produced items. Items are replaced when they wear our and not when a new model comes on the market. Most Cubans have a 4G smart phone. There is fast internet in all of the towns I visited. I did not see any homeless sleeping rough.

The island has been inhabited for 4,000 years. Columbus visited Cuba on 27th October 1492 and soon after the island was colonized by Spain. After exterminating the Caribs and Arawaks, African slaves worked the land and mined for gold.

The next two hundred years were constant turmoil in the Caribbean as many wars in Europe meant that the islands changed hands several times.

During the 1800’s there was a growing independence movement. In October 1868 Carlos Manuel de Cespedes freed his slaves and started a rebellion to make Cuba an independent country.  After many years of unrest this movement was crushed by Spain.

In February 1895 José Martí (a Cuban poet and essayist who is referred to as the “Apostle of Cuban Independence”) continued the independence struggle. He was killed early in the conflict but Máximo Gómez (Cuba’s military commander during the War of Independence) and Antonio Maceo (a Cuban general considered to be one of the greatest heroes of the nation’s 30-year struggle for independence from Spain) continued the fight. The USA entered the war in 1898 on the side of Cuba against Spain after the battleship USS Maine blew up in Havana.

The Treaty of Paris of 1st January 1899 saw Spain handover the island to America. One colonial Power had been changed for another. America wanted to annex Cuba and make direct rule but this was opposed by most Cubans.

In the next 50 years the Cuban governments signed treaties that gave the USA control over the economy of the island. Large areas of land were given to American companies to grow sugar cane. After the Panama Canal was finished many workers from Barbados, Jamaica and other islands went there to work.

Several uprising tried to change the government but these were crushed with the aid of the USA army.

By the 1950’s the independence movement was gaining strength and a series of armed attacks on the government forces were made. On 2nd December 1953 Fidel Castro landed in the Oriente Province with his brother Raul Castro, Ernesto “Che” Guevara, Camilo Cienfuegos and a small group of dedicated fighters. After an initial setback this movement gained strength as the university students and farmers joined their fight. On 1st January 1959 the Batista government fled the island and Cuba was now in control of its own destiny.

A USA CIA sponsored invasion on 17th April 1961 at the Bay of Pigs but was quickly defeated. Castro turned to Russia for help in defending the island against further attacks and this led to the Cuban Missile Crisis in October 1962.

Havana was first settled by the Spanish in 1514. It is a busy capital city with many historic buildings, and cars, which are carefully maintained. In Old Havana the streets were laid out in a grid format by the Spanish 500 years ago. The many parks and wide avenues allow for easy walking and relaxing by the inhabitants.

Travelling around Cuba is easy. The Via Azul Bus line offers a good service between major towns. Colectivos will take you at a cheaper rate. I stayed in Casas Particulares after the first two nights in Havana. These are locally owned and operated private homes where you live with a family.

The area around Plaza Vieja (Old Square) has a mixture of businesses, private homes, educational and cultural buildings.

When a building has to be demolished it is replaced with a modern one.

Work on restoring the one on the right has started. Although the exterior is kept as original the interior is ultra modern.

Cuba is well know for its classic American cars. In Havana most of them carry tourists around the city. In the country they work as Colectivos (shared taxis). These are not museum pieces but work for their owners.

Many of the newer motorcycles are electric. The Battery is where the engine usually is and the electric motor is in the rear hub.

Cuba has many museums which record all aspects of their history and culture.

Vinales is famous for growing the best tobacco and coffee. The crops are grown without any pesticides or artificial manure. No mechanized machines are allowed in the valley and ploughing of the very rich soil is done by animal power.

It is a quiet town popular with backpackers. There are many places to stay and the main street has several restaurants and stores. I spent 4 days walking alone through the coffee and tobacco farms. Although my Spanish is very limited I was welcome to visit the few farmers I passed every day.

One day I was with a farmer and as we were communicating, with basic Spanish, his smart phone rang. A nice mix of the old and new.

When Columbus arrived he found the locals already growing tobacco and making cigars. Tobacco is planted by hand and when ripe it is dried on racks in the field. Then it is moved to mature in buildings to get its distinctive taste before being sent to the factories to be hand rolled into Cigars. Some cigars are made by the farmer for personal use and sale to tourists.

Cubans love strong black coffee but most is exported.

The Mural of Prehistory is in the Dos Hermanas Valley about 2 hours walk from Vinales. It is 120 Meters Long and 160 Meters High and represents the evolution of humans.

The new houses in Vinales, and in the other towns I visited, are built of brick with a flat concrete roof and metal windows. They are very hurricane resistant. Every house has a water tank. These are built by the government with one level but expansion upstairs is added on as soon as the owners get the money.

All of the Casas Particulares I stayed in had all of the modern kitchen appliances, TV and were well furnished.

Cienfuegos is called the Pearl of the South.

Cienfuegos was settled by the French in 1819 when they left Haiti.   The historical city centre is a UNESCO World Heritage Site. It has retained the grid layout with wide tree lined streets and squares.

The José Martí Plaza is surrounded by avenues with shops, restaurants and public buildings. Some of the streets are closed to vehicles.

Maximiliano Bartolome Moré, better known as Benny Moré, was born in Ceinfuegos on the 24th August, 1919. He was a talented self taught musician and played with many bands during his life.

Every village, no matter how small, has a church. These are well looked after.

Ships entering the bay have to pass through a narrow passage. In 1733 the Jugua Castle was built to stop pirates attacking the town. 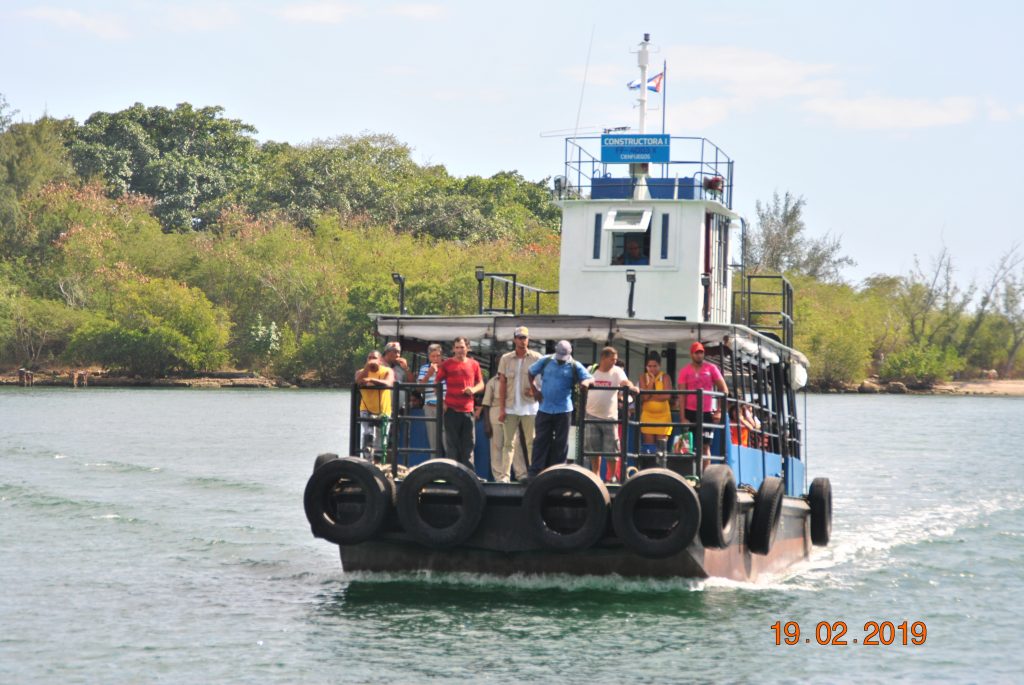 There is a ferry that makes several trips to the fort.  It is used by workers travelling to outlying villages and those working at the hotels across the bay. I took the morning ferry and spent a day visiting the restored fort and surrounding village.

After lunch at the El Pescador restaurant I was offered a hammock to sleep in until the evening ferry. 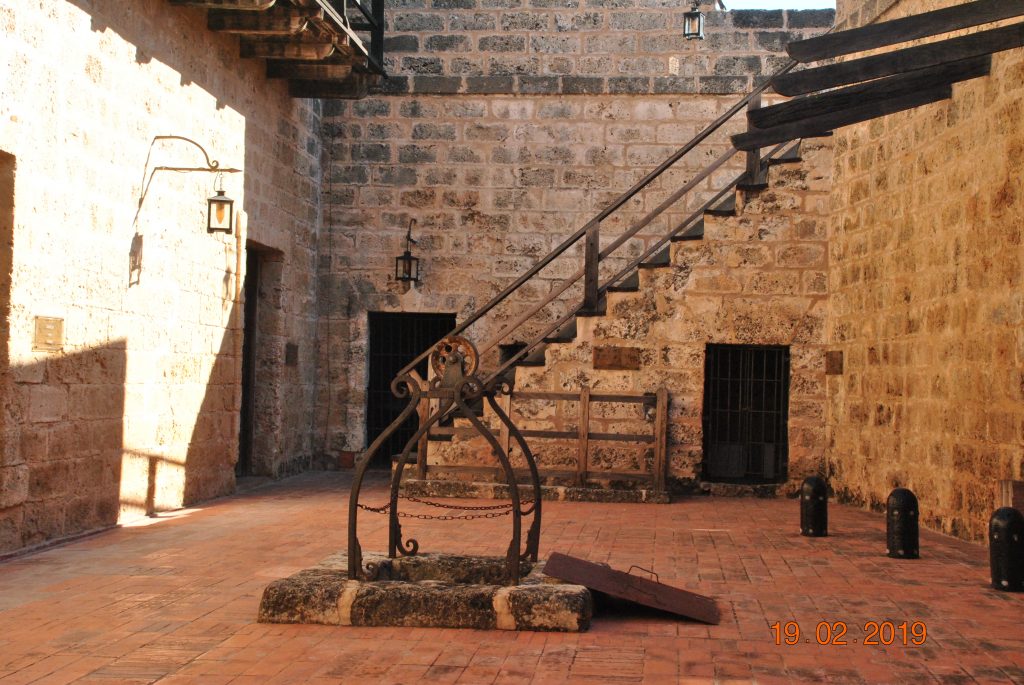 If you visit the fort look out for the Lady in Blue. She is said to roam the castle and has made at least one man go mad.

The ferry stopped many times to drop and collect people on the trip to and from the fort.

El Nicho is a nature reserve in the Ceinfuegos Escambray Mountain Range. The many trails pass several waterfalls and pools when you can swim.

Playa Largo Is a small town off the regular tourist route but visited by divers and birdwatchers. It is on the end of the large Bay of Pigs and has a lot of historical interest.

On the Eastern side of the bay there is fissure in the limestone rock several kilometres long. At places it is a few centimetres wide and in others in is several meters wide. These are all interconnected and in the larger caverns the water is crystal clear and makes for good swimming and cave diving for the experienced. 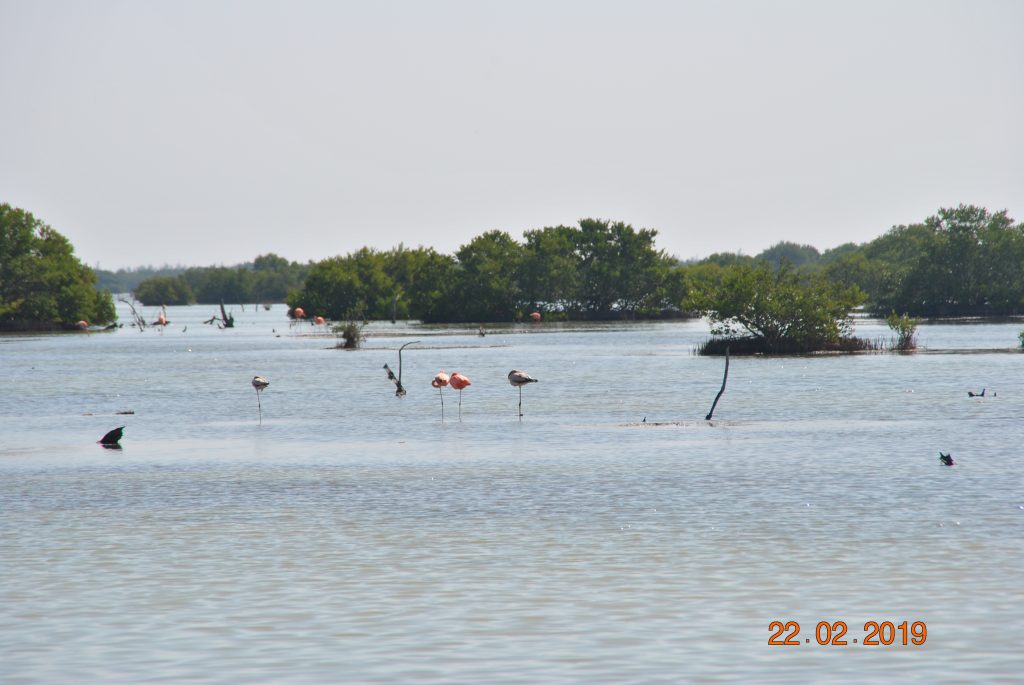 On the other side on the bay is a large lagoon which is a haven for many species of birds and other wildlife. Totally different but well worth a visit. 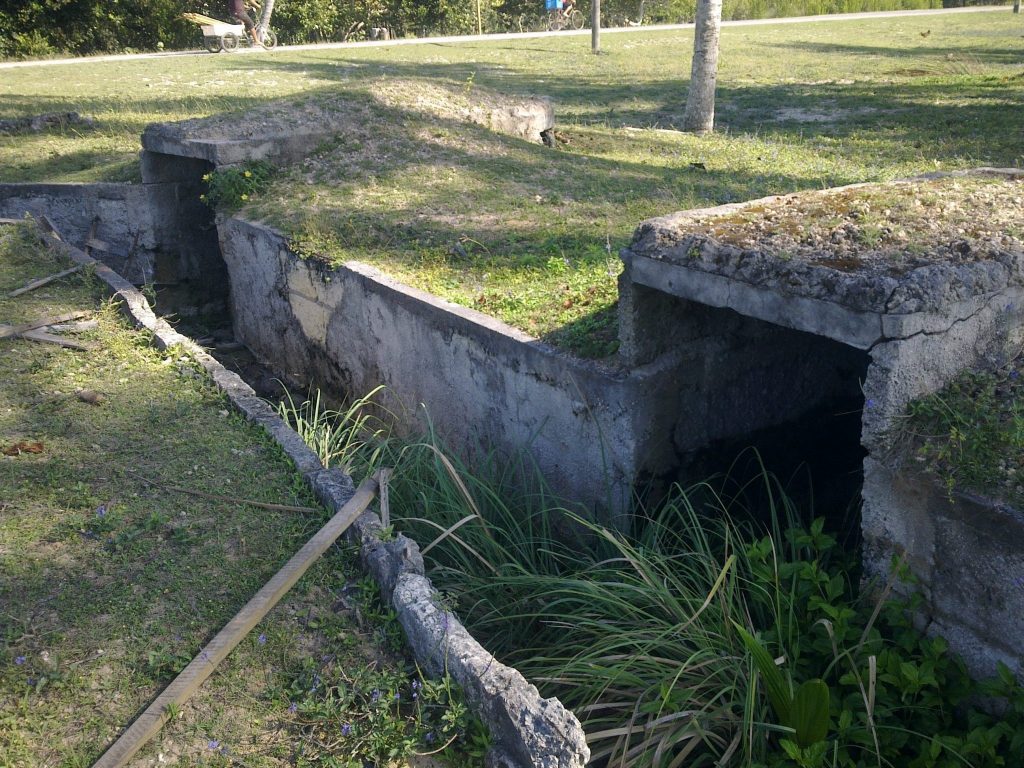 After the invasion the defences around the bay, and in other places were strengthened. Hopefully this threat has passed for good.

Thoughts on my visit to Cuba.

I found the people of Cuba very friendly. Many have a high regard for Barbados. This is due in part to the close contact between the governments over the years and the many that settled there in the early 1900’s.

I arrived in Cuba with only 2 nights booked at a hotel in Old Havana. I then travelled around by bus. I did not book any accommodation in advance. All of the towns I visited have many options to stay. When the bus arrived there were always people with flyers offering their Casa Particulars for rent (staying at the home of a Cuban family).  All were clean, safe and friendly. These are regulated by the government and so the standards are certified. I stayed 4 days in each place before getting the bus to go to the next town.

Every town has at least one ATM but the lines can be long. So it is best to go at night. In Cuba there are 2 currencies. The one you will use is the CUC which is tied to the US$. But Credit or Debit cards issued by a USA bank will not work due to the embargo. If you change money, best done at the airport when you arrive, Euro, Sterling or Canadian Dollars you will get CUC that is the current exchange rate for that currency to the US$. For US$ Cash you will be charged a 10% exchange fee. Most restaurants take credit cards. But for the smaller ones you will need CUC cash.

The local currency is 25 Pesos to 1 CUC. If the barman at you favourite shop tells you the Buccaneer Beer is 50 Pesos. Just give him 2 CUC and enjoy the beer.

If travelling by Azul intercity bus you need to buy the ticket a day or two before. Arrive at the station at least 30 minutes and immediately check in with the reception.